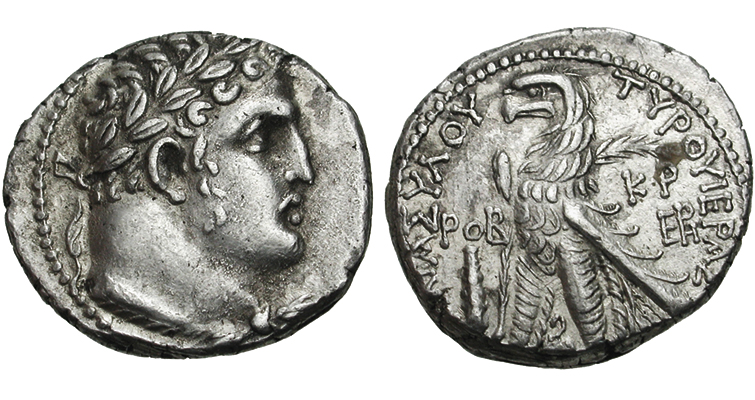 On Monday, experts working for a conservation project for the Tower of David unearthed a box of artifacts which includes a rare silver coin.

The conservation team was working on a $40 million restoration project for the Phasael tower. The structure is one of the highest towers in King Herod’s compound. Their finds include a rare silver coin called “Tyre shekel” which dates back between 125 BCE to 66 CE. Experts believed that the coin was paid to the head tax by pilgrims making their way to the Temple during Passover, or Sukkot.

The silver coin contained two images, on one side bearing the image of Melqart, a god of the Phonecian city of Tyre. On the other side, it has an image of an eagle. In fact, Tyre continues to exist today as part of modern-day Lebanon. It is also considered one of the oldest inhabited cities in the world.

Moreover, the coin was so rare that only a few pieces exist today. According to a representative from the Tower of David Museum, they will display the artifact as a part of their permanent exhibit.

It is not the first time that archeologists discovered the artifact. Experts first unearthed the box during an earlier excavation project. Unfortunately, the box was misplaced and re-discovered 20 years later.

Currently, the conservation team is working on restoring the 2,000-year-old stones in the Phasael tower. The team recently discovered large cracks which span from the top and bottom of the structure.

In a statement, engineering manager Yotam Carmel said, “The Tower of David is one of the most important structures in Israel, both in terms of its history and location.” He said that it had been decades since the structure had undergone a conservation project. “Since then, the citadel has been in desperate need,” Carmel claimed.

Carmel proudly shared that for this project, they have successfully merged the old and the new. He explained that they used traditional building techniques and materials such as plaster and lime. At the same time, the engineer said that they are also using advanced technology to determine the problem areas which needed work.

Eilat Lieber, director and chief curator of the Tower of David Museum, shared its historical significance. “Jerusalem touches millions of people throughout the world, Lieber said. She continued, “I am aware of the huge responsibility in looking after one of its national heritage sites.”

Theologians believed that the historical compound is where the trial of Jesus had taken place. Today, the tower is considered one of the holiest places among Christians, Jews, and Muslims.

Cynthia Lorraine Silva
Cynthia's love of writing was instilled in her from birth. Writing has been so deeply embedded in her bones for as long as she can remember. To deny it, to deny the stories that she needs to tell, whether it's on people, or groundbreaking events, or the simplest of truths - to do so would be to betray her very nature. The opportunity to write and express her passion is what brings her fulfillment. Cynthia is currently working as a full-time Staff Writer at Peres Daily News and Israel Now News- to deliver truth and nothing but the truth.
Previous articleLebanese Govt. Warns “Dangerous Nuclear Chemicals” Found In Beirut
Next articleU.S. President Biden Plans To Offer Iran New Nuclear Deal