Israel Reportedly Rejects Us Proposal For Summit With Palestinian Authority 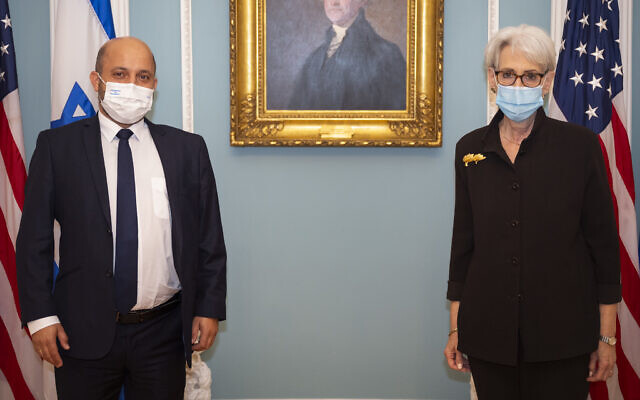 Israeli authorities rejected a US proposal last week for a regional summit with the Palestinian Authority aimed at negotiating a peace deal between Jerusalem and Ramallah, according to Axios report.

Palestinian President Mahmoud Abbas expressed frustration with the peace process stalemate and warned Israel and the Biden administration of the possible consequences.

Wendy Sherman, Deputy US Secretary of State, proposed a five-party summit, with foreign ministers from Israel, the Palestinian Authority, the US, Egypt, and Jordan meeting in Washington or a regional venue, such as Egypt or Jordan.

Three senior Israeli officials told Walla! News, on the condition of anonymity, that the offer was made during National Security Advisor Eyal Hulata’s visit to Washington.

However, the Israeli government, which was formed on the principle of not taking any major steps on the Israeli-Palestinian conflict, cannot move forward with political actions on the subject.

Israel’s national security adviser Eyal Hulata said, according to Axios, the Israeli government thinks the conditions on both sides are not ripe for such an initiative and stressed Israel isn’t interested in a photo-op that ends with nothing and results in an “expectation crisis.”

“We don’t like this idea. Past experience taught us that such an expectation crisis could lead to an escalation on the ground,” a senior Israeli official said.

The idea for the summit was originally presented to the Prime Minister’s Office in December last year where the White House suggested holding the meeting at the level of national security advisers rather than heads of state, and focusing on security and economic cooperation between Israel and the Palestinian Authority, with the backing of the U.S., Egypt and Jordan.

Israeli officials kept silent on the idea for months, hoping it would die down. After Sherman raised the issue again last week, the Israeli government clarified its stance against it.

Axios reported that Israeli officials don’t understand the administration’s continued push for this summit as there is little chance of it happening.

Previous articleWhite House Announces Biden’s Trip To Saudi Arabia
Next articleIsraeli FM: ‘Israel Has A Lot To Offer The World In General’— Remains Optimistic About Relations With Saudi