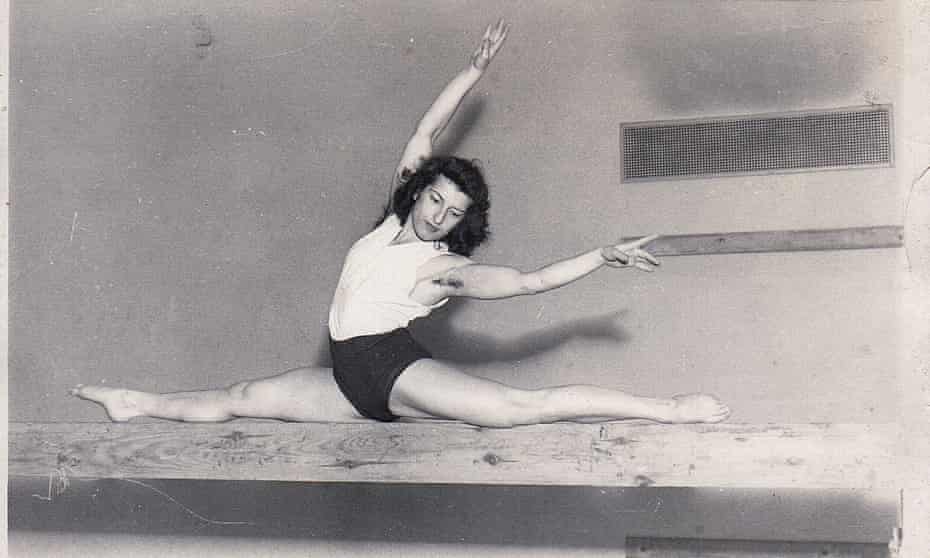 Earlier this year, Ágnes, known as Agi to her friends and family, celebrated her 100th birthday in Budapest. There was much to celebrate as she has led a remarkable life which includes winning 10 Olympic medals of which five are gold medals. She ranks third all-time among women athletes for most Olympic medals and fourth all-time as a winner of Olympic gold medals.

Becoming a centenarian was also marked by  a personal birthday message from Israeli Prime Minister Naftali Bennett, who was Education Minister at the time. She’d previously been bestowed the Israel Prize, the country’s highest civilian honour. Accepting the tribute, Agnes said: “I’m feeling very honoured and happy to know that my work bears fruit and is acknowledged after many years of activity … I wish all the best to our young gymnasts and to the future generation. Stay strong.”

Strong is certainly how her family know her. While her eldest son Rafael cares for his mum in Budapest, her son Daniel and many of Agnes’s extended family reside in Sydney, Australia. To them, she’s known as mum and Aunt Agi – a woman who has endeared herself with her ready smile and kind and generous and courageous spirit.

To the rest of the world, Agnes will always be feted as one of the greatest athletes to have ever graced the planet.

Agnes Keleti is the most successful Jewish athletes of all time and among the all-time greats in the history of world gymnastics. At the Olympics in Helsinki in 1952 at the age of 31, she was regarded as the ‘ancient’ gymnast when she represented Hungary in the sport but she defied her critics and was the most successful athlete that competed in those Games. In fact, she won 10 Olympic medals over three Olympiads and ranks third all-time among women athletes for most Olympic medals and fourth all-time as a winner of Olympic GOLD medals.  Actually 11 medals if you include the silver she was awarded with her team in the 1952 Olympics at Helsinki. When she lists the medals, she has won, she doesn’t bother to include the 11th: a silver medal she was awarded.

Her life has more twists and turns than a dramatic novel – with stories of heroism, survival, persecution and above all strength and courage.

Dubbed an Olympic icon, for her strength, stamina and athletic endurance, Agnes had to overcome unimaginable personal tragedies during her life.

Born in Budapest, Hungry on January 9, 1921, Agnes is reported in Wikipedia as ‘one of the most successful Jewish Olympic athletes of all time.[4] ” It goes on to say she “holds more Olympic medals than any other individual with Israeli citizenship, and more Olympic medals than any other Jew, except Mark Spitz. She was the most successful athlete at the 1956 Summer Olympics.”

Her life as a gymnast began at the tender age of four and by 16 she had become the Hungarian National Champion in gymnastics. Her father Frank encouraged Agnes’ sporting activities, while her mother Rosa’s influence developed Agnes’s intellectual pursuits. Agnes said of her father, “He’s the one who got me into sports.” At the age of four she was already showing promise and started to train at the VAC Jewish Sport Club in Budapest. In all, her career spanned from 1937 to 1956 during which she won the Hungarian Championship title ten times.

Had it not been for the onset of World War II, the likelihood is she would have won even more Olympic medals but the 1940 and 1944 Olympic Games were both cancelled due to the war. Agnes wasn’t spared the suffering resulting from the atrocities of Nazi Germany. She lived with the pain of losing her beloved father and many family members in the camps. But fortunately she and her mother and sister Vera managed to escape the labor camps by going into hiding. Like Agnes, her sister Vera had two sons – John Bence (born in 1938 in Romania) and Tom Bence (born in 1945 in Hungary). For Agnes, the first warning sign of what was ahead came when she was expelled from the gymnastics club in 1941 for being a ‘non-Aryan’.

Later Agnes said of her father’s fate, “I thought about how it was, what a horrible death….Before I left [home] in 1940 I said, ‘Dad, do like me, don’t wait it’s too dangerous.”

Recalling the war, Agnes said: “Until the “law against Jews” started, I had a very good life. I studied languages and music, I went out, I went to movies, theatre, in the summer I went abroad. All that was cut off and suddenly, there was nothing. There were no ghettos in the beginning. The Germans worked step by step. I blame not only the Nazis, but I also blame the Hungarian Jewish community who did not warn us and did not tell us to escape. They spread rumours that if we do everything the Germans say, everything will be okay. I knew this was a lie. So, I left my family. My dad said that he was too old to escape, and he did not leave.”

It’s fair to say she and her mother and sister survived those difficult years by living on their wits. After Agnes heard a rumour that being married meant you could avoid the camps, she quickly wed the Hungarian gymnast István Sárkány in 1944. Like her, he was an Olympian and he’d taken part in the 1936 Berlin Olympics. But it was a marriage of convenience and the couple divorced in 1950.

Thanks to purchasing and using an identity paper of a Christian girl, she managed to survive the war by working as a maid. Ultimately, she and her mother and sister and her first-born son John were saved by the Swedish diplomat Raoul Wallenberg. But her father Frank and other relatives were less fortunate and perished in the Auschwitz concentration camp.

In the winter of 1944-45, during the Siege of Budapest by Soviet forces near the end of World War II, Agnes recollects taking the bodies of those who had died and then placing them in a mass grave.

She remembers: “It was the last stage of the war  and Jews were being taken out of the ghetto and were being shot into the Danube. Those who couldn’t or wouldn’t walk, were shot on the road and that’s how their dead bodies ended up close to the house. One morning, there was a woman and her daughter lying on the road, they looked like perfect dolls, they laid on the sidewalk wearing pink silk nightgowns. They didn’t even look injured, but it was extremely cold – about minus 10 degrees Celsius – less than 15 degrees Fahrenheit – and they had frozen to death. They were placed like all the others into a wagon and rolled to a mass grave and thrown in. Is it possible to forget such a thing?”

Agnes’s favourite hobby was playing the cello and after the war she resumed playing and starting training again. In 1946, she won her first Hungarian championship. In 1947, she won the Central European gymnastics title. She qualified for the 1948 Summer Olympics, but missed the competition due to tearing a ligament in her ankle. She is listed on the Official List of Gymnastic Participants as Ágnes Sárkány. At the World University Games of 1949 she won four gold, one silver, and one bronze medal. 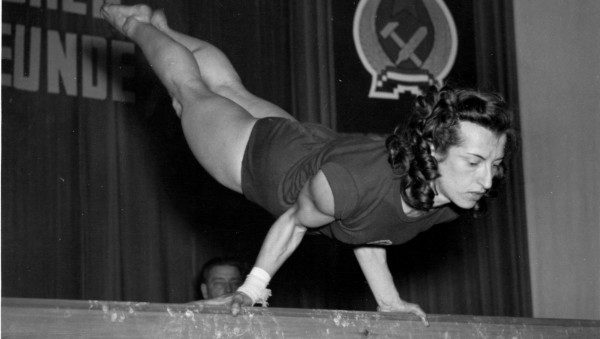 She was also one of the oldest athletes to compete and win a gold medal at the age of 31 at the 1952 Games in Helsinki. She earned four medals: gold in the floor exercise, silver in the team competition, and bronze in the team portable apparatus event and the uneven bars. She continued on to the 1954 World Championships, where she won on the uneven bars, becoming world champion. At the 1956 Summer Olympics in Melbourne, she won six medals including gold medals in three of the four individual event finals: floor, bars, and balance beam, and placed second in the all-around. She was the most successful athlete at these games.The Hungarian team placed first in the portable apparatus event and second in the team competition. At the age of 35, she became the oldest female gymnast ever to win gold.

The Soviet Union invaded Hungary during the 1956 Olympics. It was a harrowing experience with much loss of life and perhaps unsurprisingly Agnes and 44 other athletes applied and were granted  political asylum that same year at the Melbourne Olympic Games. Later, she declared, “I’d had enough of communism.”

Significantly, defecting to Australia meant Agnes was also able to send for her mother Rosa Klein. In 1957, Rosa gave all she had to the police in Hungary in order to get a passport and leave the country with nothing more than what was inside two suitcases.

She relocated to Israel in 1958 and the following year married Hungarian physical education teacher Robert Biro whom she met in Israel, and they had two sons, Daniel and Rafael.

Following her retirement from competition, she worked as a physial education instructor at Tel Aviv University, and for 34 years at the Wingate Institute for Sports in Netanya. She also coached and worked with Israel’s national gymnastics team well into the 1990s.

Danielle Bence, Agnes’ great niece from Australia, said: “We are very proud of Aunt Agi she is an inspiration to all the generation of athletes to follow. It is hard to imagine what our family suffered during the war, actually unthinkable.It is even amazing that all seven of my grandmother’s cousins survived. If not for the will and persistence of my family to survive I would not be here today to be able to tell these stories to my children.”

Interestingly, Agnes once thought she’d lost her medals, and reflected: “Staying alive is more important than the medals.” Fortunately, the medals were eventually located. Agnes returned to Budapest in 2015 where she is much loved and gets recognised in public, something she admits that she enjoys.

And being the icon she is, so she should.

Robyn Foysterhttp://www.thecarousel.com
With over 25 years experience as a journalist and TV producer, Robyn Foyster is the founder and publisher of the lifestyle website TheCarousel.com and WomenLoveTech.com. She also runs a thought leadership agency called InProfile.com.au. Previously, Robyn was the Publisher and Editor of Australia’s three biggest flagship magazine brands - The Australian Women’s Weekly, Woman’s Day and New Idea. As Group Publisher of Bauer Media Group’s most successful and profitable magazines, she ran Woman’s Day, Good Health, Grazia and the prestigious Hearst Magazine titles - Harper’s BAZAAR, Cosmopolitan and Madison. Robyn was voted as one of the 30 most powerful women in media at the 2015 B&T Women In Media Awards. Prior to that, Robyn was Lifestyle Editor for the Seven Network’s Sunrise and Editor-In-Chief of both The Australian Women’s Weekly and New Idea. Robyn was voted Editor of the Year at the 2007 Magazine of the Year Award and under her helm The Australian Women’s Weekly won the inaugural 2008 Australian Magazine Award for Australia’s best mass market magazine and New Idea won the MPA’s coveted Magazine of the Year award.
Previous articleIs Russia Seeking a Fight With Israel Over Airstrikes Launched in Syria?
Next articleMassive Palestine Jailbreak in Israel Concerns Authorities