On Wednesday, Lod, a city 15 miles from Tel Aviv, was placed under a state of emergency as residents continue to face violence both within and outside the city.

Prime Minister Benjamin Netanyahu claims that the entire situation is a complete “anarchy.” As a result, the Israeli leader places the city under police control headed by Commissioner Kobi Shabtai.

Under his authority, the Commissioner imposes nighttime curfews to control the situation. Moreover, the Israeli government also deploys 250 police reinforcement to patrol the area.

Generally, the state of emergency lasts from two to five days.

What Triggered The Unrest?

The incident began on Tuesday when a street riot broke out between Jews and Muslims at an Arab funeral.

Unfortunately, the somber event turned into violence as riots broke out. Protesters threw stones at the police officers and blocked their route. The mob also burned down several vehicles, including a bus and police cars. In response, the authorities used stun grenades. A 56-year old man sustained serious injuries after stones were hurled at his cars.

In another incident, in the city of Bat Yam, a synagogue is burned down by Arabs. 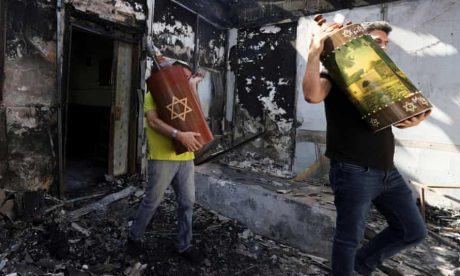 Aside from its ongoing internal conflict, the city also faces constant threats from Hamas, a Palestinian militant group. The organization continues to rain down more than 1,000 rocket in Israel. In cities like Lod, and Tel-Aviv, Israeli residents struggle to find refuge during the bombings.

Netanyahu vows to retaliate and had ordered to intensify the airstrikes. In an effort to strike down its top commanders, the IDF targeted a 13 story building that houses Hamas officials and their operatives. As a result, the military successfully takes down a high-ranking Hamas commander, Bassem Issa.

Netanyahu warns Hamas that if the airstrikes continue “we will inflict blows on them that they couldn’t even dream of.” In a report, the New York Times claims that the military is prepared to face the “worst-case” scenario as they plan to move from airstrikes to a ground invasion in an attempt to stop the unrest.

The IDF also takes civilian safety as its topmost interest. In fact, while the militant group urges residents to stay, the Israeli forces warn them to evacuate. In addition, the Iron Dome also manages to intercept 90 percent of the missile attacks from the militant group.

On the other hand, Hamas official Fathi Hammad encourages its members to behead Jews. “People of Jerusalem, we want you to cut off the heads of the Jews with knives. With your hand, cut their artery from here,” Hammad instructs.

The Hamas official alleges that Jews spread destruction and arrogance.

To appease the situation, the international community continues to mediate a possible ceasefire. Both Egypt, as well as the United Nations Security Council steps in to work an agreement.